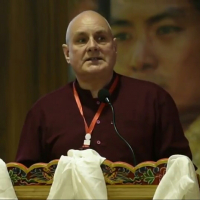 Karma Yeshe Rabgye is a Buddhist Monk from England. He teaches Mindfulness, Buddhist philosophy and meditation all over the world. Yeshe took ordination vows from H.E. Tai Situ Rinpoche in Sherabling Monastery, Northern India and has studied with H.H. The 14th Dalai Lama, H.H. The 17th Karmapa, H.E. Tai Situ Rinpoche Khenpo Tsultrim Gyamtso Rinpoche, Dzongsar Jamyang Khyentse Rinpoche, Drupon Khenpo Lodro Namgial, Geshe Sonam Rinchen and Geshe Tashi Tsering. Having received teachings and studied works of all traditions of Buddhism, the Best Way to Catch a Snake, his first book, was inspired by successive short-term retreats in which Yeshe took the Buddha Shakyamuni’s early teachings as his inspiration for practice. Although Yeshe learnt from the great Tibetan Buddhist masters in exile, his Western background forced him to question some difficult elements of the teachings, in particular, to distinguish those teachings that were essential aspects of the path from those that were mere cultural embellishments. Life’s Meandering Path, his second book, stems from this questioning and is aimed at a more secular and sceptical audience. His third book, Ripples in the Stream, is a collection of 50 of his most popular blog posts. Yeshe spent several years in a monastery in the foothills of the Himalayas teaching young monks basic Buddhist philosophy and meditation. He now offers teachings freely to all in a manner that is unpretentious and clear. He does not demand students to blindly accept what he says, but instead invites them to examine their own minds and experiences to discover the validity of Gautama Buddha’s teachings. Using everyday examples, he has the ability to bring the teachings alive, particularly to a younger audience seeking to make Buddhism relevant in their lives. His approachable manner has attracted many students who appreciate his sense of humour and practical advice. Yeshe has also travelled extensively teaching mindfulness in schools to administrators, teachers, students and parents. His teaching is secular and includes both theory and practical exercises. He has also devised a very simple technique called Breath-Focus-Reflect (The B-F-R classroom), which teachers use to implement mindfulness into classrooms. Yeshe quietly demonstrates Gautama Buddha’s teaching on compassion through the charitable trust ‘Sangye Menla’ that he founded in 2008 in Chandigarh, Northern India. The trust provides medical assistance and care to people from the Himalayan region in India. About Karma Yeshe Rabgye’s charity ‘Sangye Menla Trust‘ The trust was set-up in 2008 by Karma Yeshe Rabgye and another Buddhist monk. It helps to facilitate the medical needs; including accommodation, doctor location, translation services, and often food for roughly 3000 people a year who travel with little or no money for much needed care. It helps people from the Himalayan region who have to come to Chandigarh for medical treatment and do not know what hospital to attend, which doctor to see and where to stay. Often, they do not speak Hindi or English and so cannot communicate their sickness to the doctors. The fully trained staff at Sangye-Menla Trust interview the patients on arrival and decide which is the best hospital and doctor for them. They will attend the hospital with the patient to translate and ensure the patients understand their treatment. The trust also provides a hostel for the patients to stay in. They never turn anyone away and if the patients have no money they will offer free rooms and get sponsorship for treatment and medicines. Sangye Menla was named by HH 17th Karmapa, kindly encouraging the Trust to put the aspirations of Sangye Menla (Medicine Buddha) into practice.

You can reach me for

Building a tribe based on shared Interests...

You have unlocked the year-long
YogiMeter Program.

What do your ratings mean?

Thank you for using YogiMeter TIPS! Your TIPS will be active in 24 hours.

With membership of our exclusive Founding Fellow Program you gain the first-mover advantage and become part of the path-breaking work we are doing with the YogiMeter self-discovery tool.

You can share your feedback and expertise, offer suggestions and advice, ask questions about specific parts of your report and get insights and answers from the YogiMeter expert

This section is Locked! If you want become our Founding Fellow, unlock the year long YogiMeter Program.

Become a Founding Fellow of YogiMeter, and

Thank you for sharing! YogiMeter team will try to get back to you at the earliest.

You are about to submit your
assessment, you will now be able to
change your options after this.

You are not authorised to do this.
Please reach out to the report owner to perform this action.

Currently, you are on the Free YogiMeter Plan.Your last report will be replaced by your latest report if you continue to take the test.

To save your reports history and monitor your progress, subscribe to YogiMeter Premium now!

Would you like to upgrade your Free plan to get complete report?

Already have an account?Log in

Your YogiMeter report has been generated and waiting for you. You’ll need a Ceekr account to access your report